If you have a question or need some advice, then please visit our contact page below and we will be happy to talk.

What are Seborrhoeic Keratosis?

Seborrhoeic Keratosis are raised warty non-cancerous growths of the surface layer of the skin, called the epidermis. They vary in colour from light brown to dark brown and often have a roughened warty surface. Sometimes they look as though they have been “stuck on” the top of the skin. The most common sites to develop Seborrhoeic Keratosis are the face, scalp, chest and back. Almost one in five people aged over 60 years will develop one or more seborrheic keratoses, and some patients have in excess of 50 lesions on their upper body. Other names used to describe these growths include Seborrhoeic Warts and Basal Cell Papillomas. They often develop alongside small red vascular growths of the skin on the trunk called ‘Campbell de Morgan’ spots.

Why do they develop?

We do not know why Seborrhoeic Keratoses develop. However, they are often seen to be inherited in families and usually occur with advancing age. It is unusual to see new Seborrhoeic Keratosis before the age of 40 years. It is sometimes worth asking your parents or siblings to see if anyone else has any in the family.

What harm do they cause?

Seborrhoeic Keratoses do not develop into skin cancers, are completely harmless and not contagious. They may itch and irritate but this will normally settle down with time. They do sometimes cause embarrassment particularly if they occur at cosmetically sensitive sites such as the face or neck. Larger ones may catch on clothing.

Do they need to be treated?

No, they do not require any treatments unless they cause symptoms, or you simply dislike their appearance. Any itching or irritation may be relieved by simple moisturisers such as E45 cream or Vaseline Intensive Care Lotion purchased from the chemist. If you have persistently itchy Seborrhoeic Keratosis, it may be worth asking your doctor to prescribe a cream containing a substance called Urea and a mild topical steroid (Calmurid HC cream).

Under what circumstances will my NHS doctor consider treatment?

In exceptional circumstances, your GP may suggest treatment for troublesome skin lesions that bleed, catch or cause intense irritation. Cosmetic treatment of multiple lesions is not usually considered possible in the NHS. 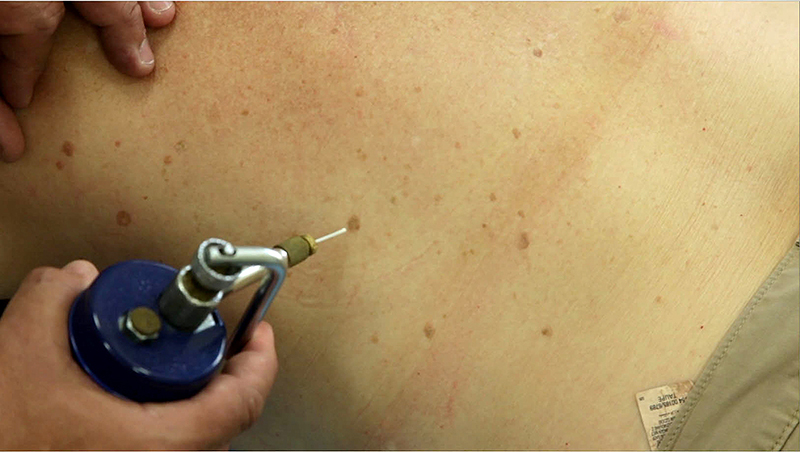 What self-funded treatments are effective?

Treatments that destroy the surface layers of the skin are most effective. This includes freezing (cryotherapy), curettage and cautery (scraping and burning), laser therapy. Creams will not remove Seborrhoeic Keratoses but may help to soften them. Thin lesions respond best to cryotherapy, but thick warty lesions are best treated by scraping them off under local anaesthesia using a sharp instrument called a curette. The base is then treated with cautery to stop the bleeding. It usually takes 2-6 weeks for treated skin areas to completely settle down after such treatments. Occasionally, treatment may produce a small white scar.

Seborrhoeic Keratoses are very common skin lesions that often develop in older age. They are harmless but they are often unsightly and can become sore when rubbed by clothing.

Learn to love your skin again

Get in touch today to speak to our friendly staff about how we can help you and your family with our expert care.

This website uses cookies to improve your experience while you navigate through the website. Out of these cookies, the cookies that are categorized as necessary are stored on your browser as they are essential for the working of basic functionalities of the website. We also use third-party cookies that help us analyze and understand how you use this website. These cookies will be stored in your browser only with your consent. You also have the option to opt-out of these cookies. But opting out of some of these cookies may have an effect on your browsing experience.
Necessary Always Enabled
Necessary cookies are absolutely essential for the website to function properly. This category only includes cookies that ensures basic functionalities and security features of the website. These cookies do not store any personal information.
Non-necessary
Any cookies that may not be particularly necessary for the website to function and is used specifically to collect user personal data via analytics, ads, other embedded contents are termed as non-necessary cookies. It is mandatory to procure user consent prior to running these cookies on your website.
SAVE & ACCEPT